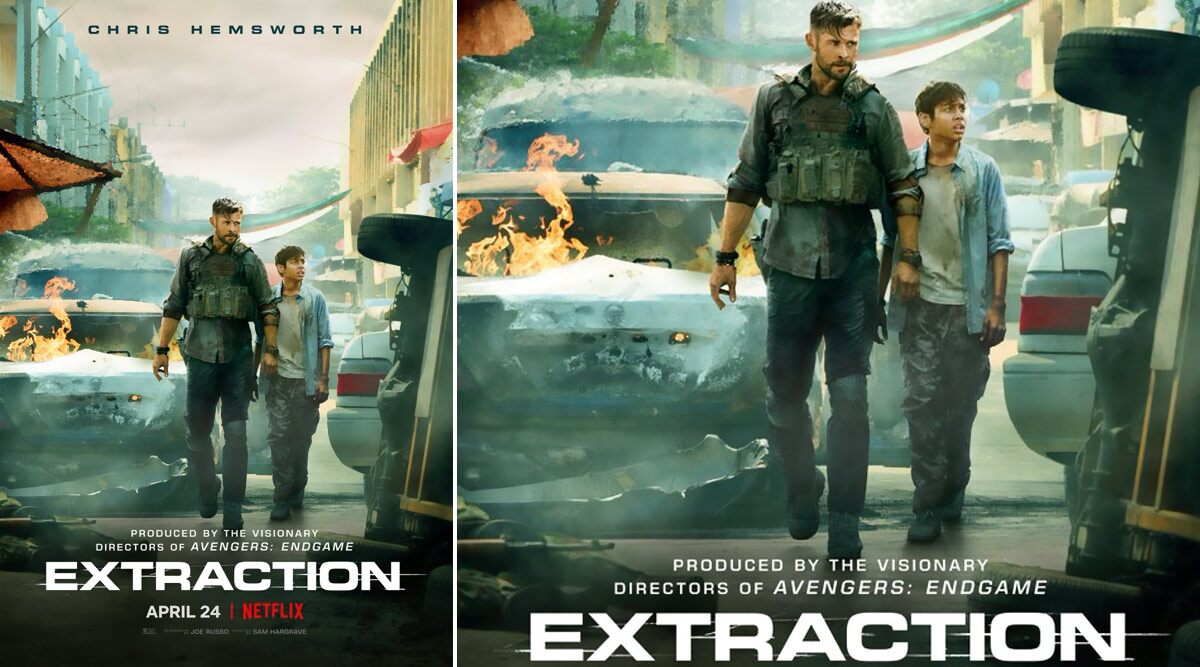 Chris Hemsworth gets his John Wick movie in this thrilling Netflix action film. Extraction is a movie that I had no idea existed until the trailer dropped a few weeks ago. The draw for this movie was clearly Chris Hemsworth in the lead, but also that Joe Russo wrote the script and both of the Russo Bros. Produced the film. I’ve been looking forward to any of their next projects coming off of the Marvel Universe and while 21 Bridges wasn’t received very well, it also didn’t look entirely thrilling. This film however had an immediate feel of some truly great action moments that we know them to be known for. The director is also a first time director, but a long time stunt coordinator on several Marvel films, so again I was positive about the action being great. Does the movie lean only on action though?

This is an action film thru and thru with John Wick being the biggest influencer from what I could tell and some hints at maybe The Raid also being an influence. With that said, you would assume that of course the action is going to be great, but what about the story? Well, the story isn’t bad and sets everything up early on to get us to the point where we have Tyler Rake (Hemsworth) trying to retrieve the son of a crime lord and extract him from the city so that he can get paid.

The story is simple enough and does its job of setting up why everyone is now after Tyler and trying to kill him. We also quickly get his motivation as being just doing it for the money, but that also subtly changes throughout the film as we seem him grow closer with Ovi. Now outside of the motivations and the actual point of the film and why everyone is doing what they’re doing, the story is pretty bland and doesn’t have much depth. However, I don’t consider that a knock on this movie at all.

Like John Wick and say The Raid, they all have fairly simple plots that set up the reason for all of the action and why our main character is doing what they’re doing. That’s all well and good as long as the movie can live up to delivering on the action. In movies like these for myself, my brain turns to a level where I am entirely okay with not much story and want to just see some incredible action sequences. Because of that, I really didn’t care at all about any of the slower parts where people were talking because I wanted to jump right back into the action. That’s the biggest downside of this movie though, I just wanted more action.

Getting into the action though, it really does show the level of expertise this director has with choreographing action scenes. If not from early on in the film, then definitely when we get to the one shot take. The Netflix Marvel shows like Daredevil made it a point to try and outdo themselves with one-shot action sequences that were all very impressive. We have also seen many other one-shot continuous takes in many other films and some trickery like Birdman and 1917.

As far as action movies go, this one has one of the best continuous shots that I have ever seen and can even think of off the top of my head. It is truly impressive as we see not only hand to hand combat, but also gunfights, car chases, and even falling off a balcony. This continuous shot is so impressive that it really helps make the movie that much better. Now maybe I’m just overhyped about it, but I really couldn’t get over how visually impressive it was and how intrigued I am to see any behind the scenes for how they were able to pull it off.

Other than just that scene though, the action entirely is very good and all feels very much like John Wick or The Raid. The action is brutal and violent, but it’s our main character Tyler that sells the impressive scenes. Like Keanu Reeves or Matt Damon as John Wick or Jason Borne, shoot even Ben Affleck as The Accountant, Chris Hemsowrth nails the role both in acting and in pulling off the stunts. Now I say his acting was quite good, but he also didn’t have a whole lot to work with dramatically, but there were a few scenes that he was quite good in what he was doing so I give him that.

His stunt performance though in this movie is very much more impressive than his work in the Thor films. I think this may be due to the fact that it seems that most of the action in this movie was practical rather than visual effects like it seems to be in most of the Thor movies. I think visually I am just more impressed with anything practical vs visual effects. All in all, Hemsworth nails the role and sets himself up as a character that I wish to see in future films or sequels I would say. That also all depends on your interpretation of the ending which was so good despite my fanboy anger at it. I feel like there could be sequels, but I also haven’t seen Netflix do a sequel to any of their movies like this yet so we’ll see.

To wrap things up, this movie is a solid movie from start to finish, but is an excellent action thriller on all levels. It has some of the best action sequences I’ve seen in a while along with one of the best continuous shots. Hemsworth gives us a fantastic character that I could see falling in line with characters like John Wick or Jason Borne. There is also a surprise actor about halfway through this movie that I didn’t know was in this movie. Outside of that though, the film seems to lose momentum anytime the action stops, but it hits some high peaks whenever the action starts back up.

I highly recommend this for anyone that is a fan of action movies especially if the trailer remotely peaks your interest. I think this is one of the better movies that Netflix has released and I almost wish I could have seen this in theatres. I think the general audience will really enjoy this movie and is one of the better things to come out during this time of being stuck at home. Go out and give it a shot.