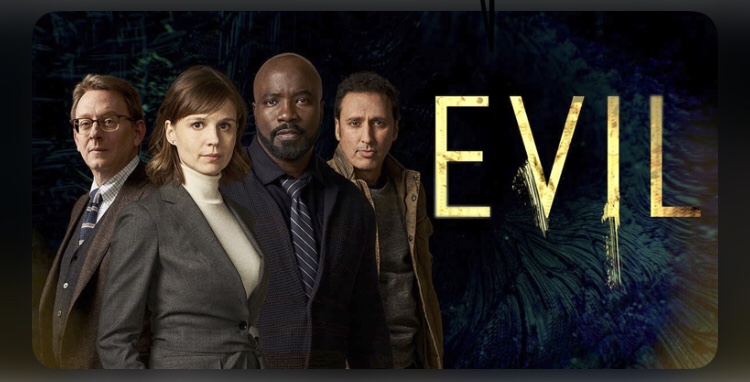 There is so much television. Outside the big steaming services and premium channels we still have classic networks pumping out shows for your parents or grandparents depending on how old you are. One that’s gotten a lot of attention comes from the NCIS dispensary CBS… Evil staring Mike Colter of Luke Cage fame. And since it is spooky season finally might as well look at what mainstream TV is up to.

Evil doesn’t follow Mike Colter’s character directly but instead Kristen Bouchard, played by Kathy Herbes, a criminal psychologist who comes head to head with Mike Colter’s David Acosta, an assessor for the Catholic Church, when a criminal defendant is said to be possessed. David and Kristen then must team up with their resident skeptic and handyman Ben to find out if the monsters and miracles of the world are the work of everyday life or preternatural. Their work often puts them at odds with Michael Emerson’s Dr. Townsend, a rival psychologist looking to push his hateful agenda on the world, but might also have some supernatural connections of his own.

It’s odd watching a series that feels made to be watched weekly try and be Netflix-lite. A comparison to the Netflix Defenders series is apt since they look so similar. Being they are both set primarily in New York during late fall into early spring (so Mike Colter can wear jackets just small enough to show how jacked he is), with lots of heavy atmosphere.

The season also uses a lot of great physical looking props and effects. It would be so easy to lean on digital and computer work to make some of the monsters seen in the series, but instead they go for real effects and they work. Seeing people in these amazing suits is impressive and surprising.

What sets the series apart, however, is how interesting the premise. A supernatural horror series where the reveal doesn’t always have to be a demonic presence or is more complicated than first appears is really interesting. It allows for so many didfeeent kinds of episodes and storylines to appear. They are able to do pastiches of different horror and supernatural stories all while trying to find real world psychological reasons they might be happening. They run the gamut of effectiveness. Some, like being trapped in the basement by a killer works in its subdued nature and easy to grasp emotions. Others, like the effectiveness of exorcisms on people who need psychological help… that’s a little more complicated and feels easy.

It feels easy in the moment at least. The show has a really interesting approach to pacing. Every episode has both a standalone story they have to solve along with a collection of usually two or three events. A personal drama or unrelated horror story taking place in the background. Usually all three reach some kind of endpoint by the credits. Some are left suitably vague or uneasy on purpose while others come back. The season has a sense of continuity that’s surprises me. The status quo doesn’t reset every case. It keeps some events and builds on them or goes back to old cases and forces the characters to face the mistakes or errors in their decision. It happens once early on when someone sues for the harshness of their exorcism, but when the first case of the series comes back as a side plot in an episode I was shocked and impressed. This goes for reincorporating past cases in new ways that don’t feel forced. Vague symbols, leitmotifs, and ideas coming back around. It’s honestly surprising how climactic the series is despite how stop and start the overall pacing feels.

The strong characters help. Kristen is more than a Scully-type. She isn’t close minded and is there just to be negative, but instead seeks to find truth. David is clearly tortured but means well and has a strong conviction. Ben, the best character, plays great as a skeptic and audience standin moreso than Kristen when it comes to the religious issues. Finally, Michael Emerson’s Leland is wonderful. Suitably punchable, while being intimidating in his own right. A great representative of what a internet troll would be like in real life. That makes his goal of radicalizing others into being incels all the more fascinating. He works as a great villain.

I make a lot about this series running on CBS. I mean NCIS lives there and that is as safe as you can get. Most CBS programming seems that way (as someone who doesn’t watch cable I can only go off the times I visit family and am forced to watched TV commercials). So it continues to shock just how progressive the series is most of the time. Focus on social issues, morally questionable endings, and a minority cast. Ben is Muslim, David black, Kristen a functionally single mom who is religiously lapsed, is refreshing. It doesn’t even criticize the use of drugs recreationally and supports no traditional marriages. Unfortunately not all is great. This is technically a religious series so even as it does poke jabs at religion and the Catholic Church it still has them be overall good-if questionable-people. But where it really gets problematic is making a women’s clinic the villains.

This will get into spoilers and talk of the story, but it’s revealed that the evil being down is to corrupt fetuses while getting in vitro fertilization. The reveal works great in practice and also thematically, but can be read as women’s clinics literally being run by the Devil. That is one of those impossible (for me) debates. I understand the artist merit in the show, but it is not without context in the wider world. I drive by a Planned Parenthood regularly and always see people protesting outside. People believe it is already evil (yes I know fertility clinics are not the same, but I can see people reading it that way. I also assume there are dozens of videos about how planned parenthood was started by satanists or something), so a show supporting that can be problematic. Also it takes about the Rwandan genocide which I know nothing about.

Outside of that one reveal and some support of a very corrupt religious body it is a good show. The setup and scares are unique. Has great cinematography and production values, strong characters, but some weak plotting in places. It’s a good horror watch. I mean they have an episode about a haunted Christmas song that gets stuck in your head. That’s so cool.

I’m cleaning house and selling some media. If you would like to buy comics, manga, or cards I owned and used follow this link: https://ebay.com/usr/connorfahy1013 say you’re a reader and I’ll be happy to discount any item for you!